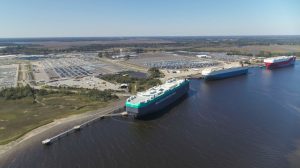 The Georgia Ports Authority will develop 85 additional acres and expand its vehicle processing facilities at the Port of Brunswick. Already the nation’s largest terminal for the import-export of autos and machinery, Colonel’s Island has another 355 acres available for development. (GPA Photo)

SAVANNAH, Ga., March 29, 2022 – The Port of Savannah’s container volume grew nearly 18 percent in February, extending year-over-year increases to 19 consecutive months for the Georgia Ports Authority. To better accommodate that growth, the GPA Board has expedited more than $538 million in capacity expansion projects initially anticipated years into the future.
“Today’s action by the board will result in an unprecedented expansion, ensuring our ability to implement flexible solutions to meet our customers’ evolving needs,” said GPA Executive Director Griff Lynch. “This growth plan is part of an overall strategy to enhance operations, accommodate increased demand, and deliver the world-class service and reliability that have become synonymous with GPA.”
At the board meeting, Lynch reported the Port of Savannah moved 460,413 TEUs in February, an increase of 69,610 TEUs, or 17.8 percent.
In light of the sustained increase in cargo volumes, Georgia Ports will make major investments in both Brunswick and Savannah. These expansion projects will increase the Port of Savannah’s annual capacity from the current 6 million to 9.5 million TEUs by 2025.
GPA will develop 85 additional acres, which will include vehicle processing facilities at the Port of Brunswick. The new pavement and buildings are slated to be complete in 2023, significantly increasing capacity. Colonel’s Island Terminal has another 355 acres permitted for development. read more…