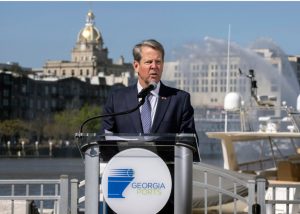 SAVANNAH, Ga., March 25, 2022 – The Georgia Ports Authority, U.S. Army Corps of Engineers, Georgia Department of Transportation and dignitaries joined Friday to mark completion of the Savannah Harbor deepening. The project expedites the flow of cargo to and from global destinations by reducing tidal restrictions for mega-ships transiting the Savannah River.

“This is a great day for the state of Georgia and for the nation,” said Georgia Gov. Brian Kemp. “The Port of Savannah is the gateway port for our region, and the first choice of businesses serving the U.S. Southeast. Completion of our harbor deepening is a testament to a shared commitment between state and federal partners – like our previous governors and current and former members of Congress who worked tirelessly to help move this project forward – to provide the infrastructure our economy needs to thrive. Our collaborative approach to economic development is what makes Georgia the best place to live, work, and raise a family. I also want to thank the Georgia General Assembly for their valued partnership and for backing this project through many legislative sessions.”

Dredging for the Savannah Harbor Expansion Project started in September 2015, adding five feet in depth to the shipping channel. Initial feasibility studies for the harbor deepening began in 1997. read more…